Why We Make Funny Faces When We Lift Weights?

It’s so much fun to lift weights! You are in a battle with the iron, focused on a safely executing your lift with perfect technique. You take a deep breath, you place yourself in front of your  bar with a clean setup, start pulling hard and complete an almost perfect deadlift! And boy was it heavy! You are super excited and proud of your result. You go check the video you recorded of your execution, everything seems in place, your coach would be proud of you! But wait a minute, what is that face you are making? Is it involuntary? Are you as uncomfortable as that picture is showing? Is your weightlifting face trying to send you a message?

Funny faces while weightlifting, is it normal?

The fact that our face changes and tenses up when we lift heavy weights or do some kind of muscular tensing, like unscrewing the lid to a jar, is totally normal. The most simple answer is that, during strength and power tasks, it is common for athletes to clench the jaw, develop muscular tension in the face and neck, and activate core muscles. Apparently all this dynamic has a huge athletic potential for improving strength and power. Isn’t this awesome? Maybe it’s true, the force is in us.

How this really happens?

The neurons in your motor cortex are grouped by body part. Parts with a complex range of movement, like the hand, take up more space. Parts with a limited range of movement, like the hip, take less space. The hands, the tongue and the facial features are extremely important, so they take up a lot of brain space. Together, all the parts form a full, representative map of the human body, called “motor homunculus“. This motor homunculus is, in simple words, how your brain sees your body from the inside. As you can see in the diagram, it’s configured as the lower limb, hand, fingers, face, lip, and tongue area in that order. All of the hand neurons together, then all of the face neurons, then the tongue neurons and so on.

There is a lot of studies that showed a strong relationship between hand and mouth muscles. But this one in particular shows how precision and power grip are systematically connected to motor processes involved in making articulatory gestures.

For understanding this, let’s take a look at MORA (Mandibular orthopedic repositioning appliances). It’s the mouth piece that you probably have seen professional weightlifters wear during their lifts. The objective of using this tool is to position the lower jaw down and forward to increase strength and athletic performance. The reason why it’s so important to keep a correct posture of the jaw while lifting is because there is a relationship between facial malocclusion (misaligned teeth) and the function of the hand. This study tested the relationship between hand-mouth and strength of the forearm muscles while performing the hook grip and pinch grip. The results are revealing. Regardless of whether wearing the MORA or not, muscle activity and grasping power of forearm and masseter muscle (the jaw muscles) significantly increased. Obviously, there were better results when the athletes in the study were wearing the MORA. The conclusion was that MORA might help improve the function of the forearm because it activates the function of the masseter. This other study showed that jaw clenching increased grip strength by almost 16%, they concluded that “jaw clenching resulted in acute strength improvements”.

In short, there is a huge potential in gaining strength in your upper limbs while making funny faces that involve specially the muscles of your jaw. Isn’t this great news?

CAP is the increase in performance via simultaneous activation of muscles primarily involved and not involved in an activity. In other words, when the area of the motor cortex that controls jaw musculature is firing, this activity can prime or enhance activation of other motor cortical areas, such as those that control the arms and hands, when both areas are activated simultaneously. There are several studies that show that clenching the jaw is the most common example of CAP.

All of this information is very revealing. I think that, now, I value my natural funny grimaces. They are the face of my internal force and the smart connections that my brain executes so I can gain strength and power in my lifts. This is awesome! But wait, what if lifting weights can also help prevent and undo skin damage that causes aging giving you an ageless face?

Jackie Warner, a fitness trainer, wrote in her book that “recent research shows that working your muscles increases the production of collagen cells and stimulates the production of growth hormone, which can repair the connections between your skin and muscle, giving you a tight, toned appearance.” On this same topic, the dermatologist David Bank, M.D., said that “by getting your cardiovascular rate and blood flow up, these types of exercise deliver more nutrients, like vitamins and oxygen, to the skin cells all over your face and body.  That increase in vitamins and oxygen to your skin cells helps them reproduce and enables the repair mechanisms in your skin to undo damage from years past. Plus, those nutrients feed the fibroblast cells in the skin that produce collagen so they can make more of the wrinkle-fighting nutrient”. Dr. Banks added that “getting a procedure doesn’t improve the health of your skin like exercising can because it doesn’t boost collagen, improve blood flow, or stimulate growth hormone.”

According to this article by The New York Times, new research shows that exercise not only appears to keep skin younger, it may also even reverse skin aging in people who start exercising late in life. Plus, the McMaster University researchers discovered in a study that participants over the age of 40 and as old as 65, who were active for at least three hours a week; had skin on their booties that was similar to that of someone in their 20s and 30s.

When we lift heavy weights, we naturally pass through a process of mental and physical preparation to lift successfully. We use involuntary strategies controlled by our brains that are designed to enhance physical performance. These strategies can be translated to “making funny faces”. These weird grimaces originate at the jaw, that’s why your whole face looks a little crazy. Our strength finds its potential when we engage these face muscles. And this isn’t a novelty. Long ago we discovered the strong relationship between the jaw and muscle activation. For example, Roman soldiers were said to place leather straps between their teeth to improve battle prowess, Native American women would bite on sticks during childbirth to ease delivery, and soldiers in the American Civil War were given bullets to bite during battlefield surgery to assist with pain management.

So keep your arms wide open and welcome all of those funny faces during your lifts. It’s your natural warrior face. Let muscle tension occur naturally, any tightening that occurs in the jaws, fists or elsewhere can boost your performance but should just happen and not be forced. Keep your lifts safe and have fun!

Giuliana works in social development and empowering women is one of her ultimate goals. She is passionate about health, fitness and traveling. She loves CrossFit because of the variety of the workouts and the community, but also does yoga and runs with her dog, Nazca.

Stopping the Nagging Pains in Weightlifting 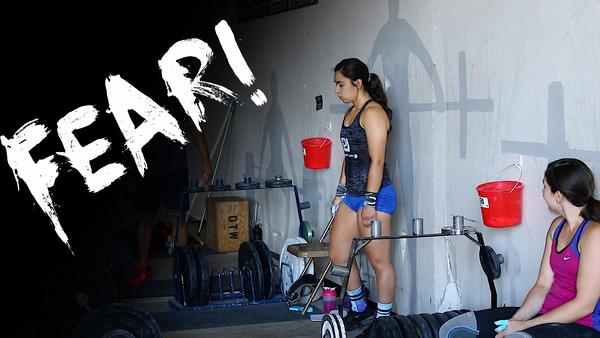 3 Ways to Overcome Fear in Weightlifting

Technique for More Weight: Hip and the Start

Deadlift Styles, Which One are You?