Rounding out the 2020 Open 20.5 in Choose Your Own Adventure Style

The final Open workout of the 2020 season has been announced, and it’s something we’ve never seen before.

It’s a test of physical fitness, gymnastics skill, and mental fortitude, all wrapped up in a package that allows the athlete to choose their own rep scheme. 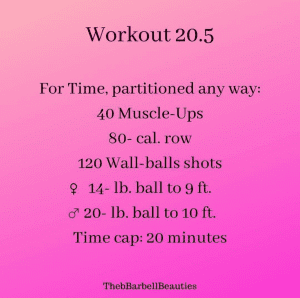 If you’ve been around the CrossFit community for a few years, you know there always are certain moves that we see in every Open. And if you’ve been paying attention, you know that three major moves hadn’t shown up in the previous four WODs.

Here they are, all in one workout.

There are several ways you can tackle this WOD in the 20-minute time cap, but the key for any athlete is to minimize transitions.

There are three major portions to this WOD, and to give yourself as much time as possible to chip away at any of the moves that may be less comfortable for you, it’s important to start with the move that’s strongest for you so you can bank time.

For some people, that will mean getting the row or the wall balls out of the way as quickly as possible.

However, that doesn’t mean you should power through the entire 80-calorie row at the beginning. Instead, start with a big chunk of your strongest move and, when you start to slow down, switch to a different move and knock out another chunk.

For many athletes, the ring muscle-ups (or pull-ups for those in the scaled division) will be the sticking point on this WOD. If this is the case, just focus on getting the row and the wall balls done as efficiently as you can for a good tiebreak time, and spend the rest of your time working on your ring muscle-ups or pull-ups.

Open Magic is a thing, so you may surprise yourself with your first RMU!

If You Have Some Ring Muscle-ups

Tier Three Tactical recommends a plan to row no fewer than 10 calories at a time. This minimizes the time you’ll spend switching back and forth between the rower and the other equipment, saving you time.

If you can do a max of 8 muscle ups, for example, don’t go out of the gate trying to get all 8 each time. This is a surefire way to tank your progress and leave you stuck trying to get 8 RMUs each time.

Instead, shoot for a number that’s just under your max. This allows you to chip away at all 40 of the reps but not completely max out your capacity in any given set.

Once you start to tire, move on to another portion of the WOD and come back to the RMUs.

If You’re a RMU Pro

If you’re an athlete that’s got RMUs in spades, it may be best to break this WOD up into sets so you can mentally think of it as a typical “rounds for time” WOD.

An example of this tactic may be:

If you’re more confident in your RMUs, knocking several of them out right away, while you’re still fresh, will give you a good leg up and allow you to take your time later in the WOD as you start to tire.

For athletes choosing the scaled route, this same plan of attack is helpful to allowing you to chip away at the reps without being constantly switching between exercises.

For Those Who Don’t Have RMU or Pull-ups

If you show up and do nothing but knock out the 80 cal row and the 120 wall balls, that’s going to make you stronger and improve your fitness.

If you finish those two moves and have time, practice your pull-ups or your RMUs. There’s nothing wrong with spending some quality time trying to master a tough move, and being able to choose your own order of operations lets you get the easier moves out of the way first.

View all posts by Michelle Tipsword
Leave a comment